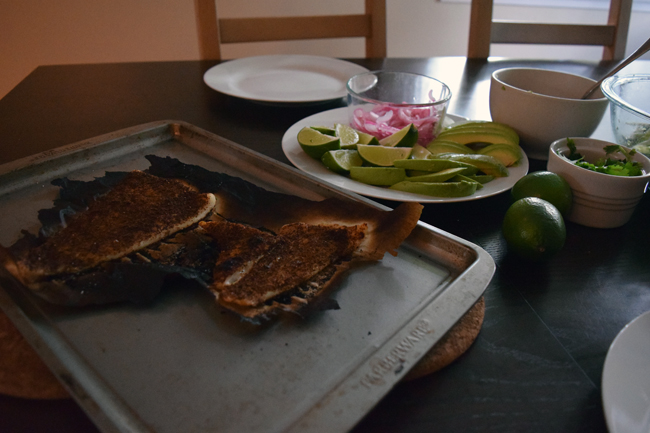 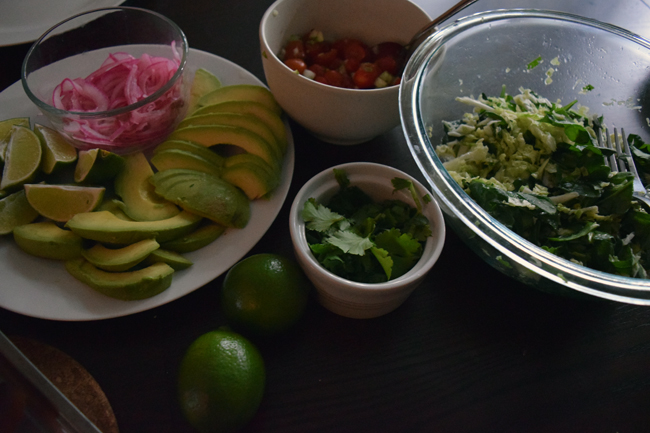 “The taco is the most versatile fruit.” – Hannah Hart, My Drunk Kitchen

Second, nothing quite smacks me in the face like a taco craving. I think I may say this about all foods (and in fact I briefly looked through my own blog archives to check, but then it got tedious), but, really, tacos. And I like all the tacos, but I especially like fish tacos. I especially especially like the ones in Pescadero, but I’ll take what I can get. Until I read that one Food52 article, I’d never really thought to make them at home. But, hey, as promised, it was relatively easy and quick.

Here’s what I used for toppings: I quick-pickled red onion by slicing it thin and submerging it in lemon juice. I also prepared cherry tomatoes with cucumber and a cabbage and spinach slaw that I massaged with a bit of lime juice and cilantro. For toppings, we have avocado and cilantro. And limes, of course.

The fish was simple, too. I’ll write it up as a recipe, but really, it’s not any more involved than chopping up vegetables for toppings.

Preheat oven to 350˚F. (I heated up the broiler instead, which sort of lit my parchment paper nearly on fire, as you can see. It worked, and it was fast, and it didn’t make my apartment hot, but there’s the paper on fire thing. So, you can do that, but don’t say I didn’t warn you.)

Rub fish on both sides with chili powder, cumin, and a bit of salt and pepper. Set on a piece of parchment paper on a baking tray.

Bake fish until it’s just done — whether you’re using the oven or broiler, it’s just under 10 minutes for each inch at the thickest point of the piece. You can also heat up tortillas in the oven at this point.

Serve as a DIY taco bar for minimum time between beginning dinner and food in face. Yum.