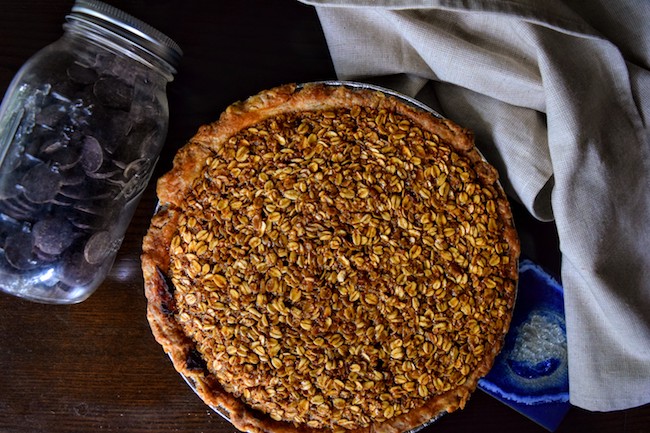 I seem to be talking a lot about oatmeal these days. I remain an advocate of savory oatmeal as an important part of breakfast rotation (with soy sauce and a fried egg; technique from Mom). There was an extended conversation about the place porridge has in the Millennial diet during which I’d drank so much coffee that I was slightly yelling and slightly frothy. And, relatedly, I declared oatmeal as “basically the same” as grits when I was trying to make a point about breakfast mushy foods. I’m really fun to converse with, basically.

This isn’t even including oatmeal in desserts (which I’m for, for the record). I decided to make this black bottom oatmeal pie for Pi Day at the last minute. It’s very good, and I have never deviated from the Elsen sisters’ recipe — very rare for me. It is kind of like a giant oatmeal chocolate chip cookie, as all the descriptions read. It’s also an unfussy pie (don’t let the double layers of filling scare you). The ganache layer on the bottom is forgiving since it’s not visible, and the oatmeal/custard layer comes together in one bowl and bakes up evenly. There’s no second rolling of a crust or too much liquid to worry about. And it smells so good while it’s baking.

And, bonus, if you bring it in to your office, you get to talk at your coworkers about, you know, how oatmeal works conceptually in pies.

1 single pie crust, rolled and placed into a pie tin (I used my usual buttermilk pie crust from Joy the Baker)

Preheat the oven to 400°F. Parbake your pie crust for 15 minutes using pie weights. Beat one egg and brush the pie crust bottom with the egg and return to the oven for 1-2 minutes, uncovered, just to set the egg. Save the rest of the egg for the filling.

Lower the temperature of the oven to 350°F. Spread the oats out on a baking sheet and toast in the oven until they smell… toasty, around 12 minutes. Set aside to cool while you make the filling

Make the ganache by bringing the cream to just under a boil using medium heat in a saucepan. Remove the saucepan from the heat, pour in the chocolate pieces, and let it sit for a few minutes to melt the chocolate. Stir gently until the ganache is smooth. Spread the ganache onto your pie crust evenly, and place the pie crust in the freezer to set the ganache.

Beat all 4 eggs (including the egg you saved from the beginning) and add a little at a time, whisking to combine. Stir in the cooled oats.

Retrieve the pie shell from the freezer and place on a baking sheet. Carefully pour in the oatmeal filling.

Bake in the oven for 50 minutes to an hour, rotating midway through. The pie is done when the edges are slightly puffed, and the center is not liquidy but still has some give.

Pie should be cooled completely before serving. A little finishing salt is very good on this pie.