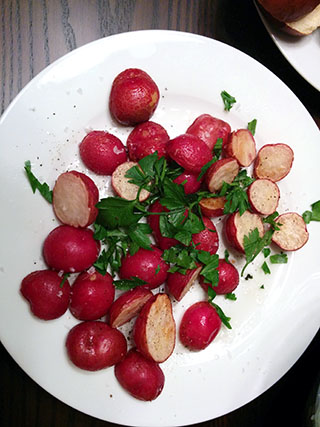 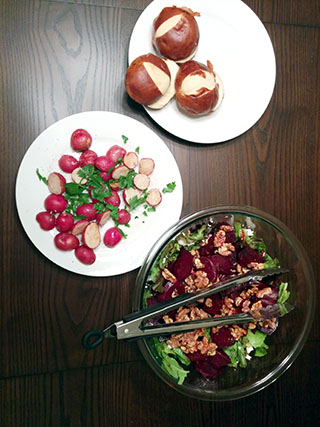 Don’t let me near a bag of salt and vinegar potato chips, because I will eat the whole bag, even if my mouth is kind of burning from the acid and maybe cut from eating too fast by the end. Hey, I never pretended to have any restraint. As much as I like eating a bag of chips for dinner, sometimes, that’s just not a choice I can make, so… salt and vinegar potatoes!

They’re actually good — slightly crisp (though, I won’t lie, nothing is like a potato chip), tangy and salty, and you can say that you basically ate a vegetable. I know potatoes don’t count, really, but it’s closer than chips.

Bring a medium-sized pot of water — enough to submerge all the potatoes — to boil.

Cut the potatoes in half, or quarters if they are big.

When water’s come to a boil, add vinegar and salt, and stir briefly. Add the potatoes, and boil until they are just barely tender, around 20 minutes. Drain the potatoes.

In a skillet, heat oil until it’s shimmering. Add the potatoes and fry until they are slightly browned and crisp, 10 minutes or so. Try to resist the urge to move them around too much — I’ve found that letting them sit helps them brown and keeps them from sticking too badly.