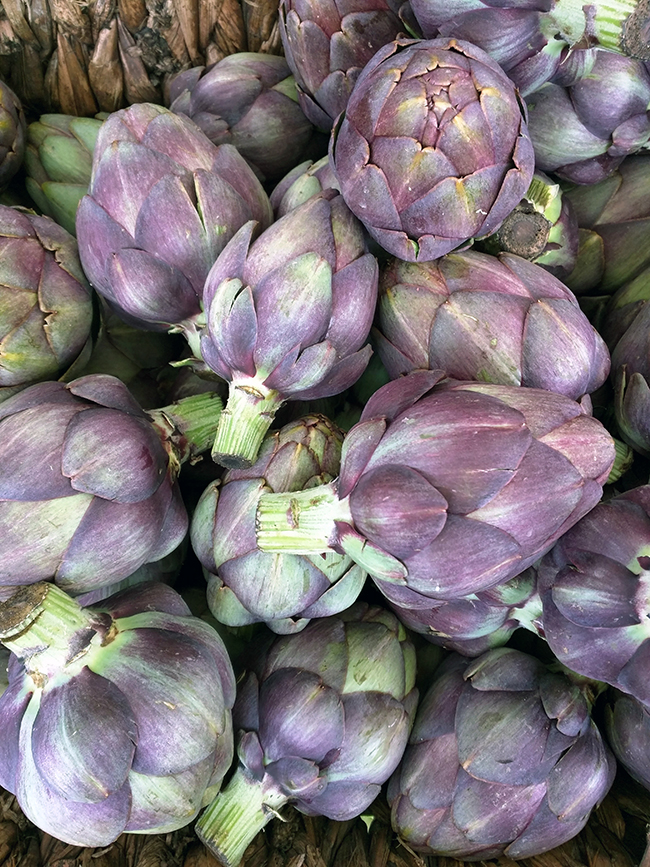 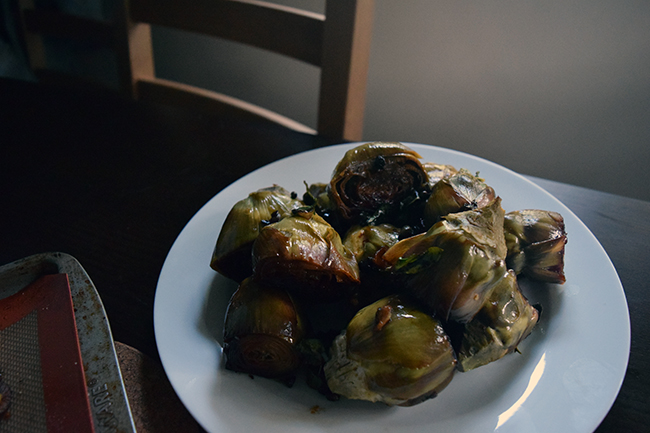 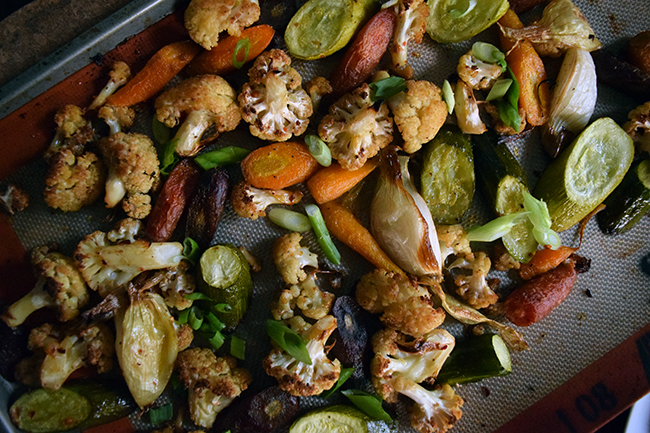 Have we chatted artichokes? I love them for more than a mayonnaise (I mean, aioli) vessel, though, seriously, I do love a good aioli, too. I find their flavor bafflingly difficult to describe other than, “… good,” (followed perhaps by some grunts of approval), but I do heartily approve. Also, does eating a lot of artichokes and then drinking water immediately after make the water taste oddly sweet to anyone else? Can someone go try it and affirm that I’m not bonkers? I guess it’s a relatively harmless way to lose it, if I have, but it’s weird.

The first time I ate artichokes — I think at a Cheesecake Factory with my friend’s family — I actually just pretended that I knew how to eat them, even though I had no idea. It seemed like a fancy food that I should know how to eat, so I just lied when my friend asked if I knew what I was doing. In retrospect, I’m sure my fib was totally transparent, because I then needed to learn how to eat artichokes by awkwardly watching them. They kindly did not point that out.

If we’d been enjoying this dish, then, perhaps I could have gotten away with my lies. The artichokes are trimmed in the preparation so that the entire thing is edible. It’s a bit of work to trim them, but the rest of the recipe is easy. If they’re accessible, baby artichokes make this dish much easier, because they don’t yet have the inedible fuzzy choke part. Still, probably worth it either way, because it really is very good. The artichokey taste (seriously, how do you describe the taste?) comes through, complimented with savory garlic, floral wine, and pops of bright capers and mint. The dish isn’t that much of a visual stunner at first, but the deeply caramelized little leaves are beautiful and dramatic in their own way, I think. And, honestly, both times I’ve made this, they haven’t stuck around long enough for anyone to get too close a look.

And, yes, this is a continuation of my huge crush on April Bloomfield.

Pot-Roasted Artichokes
Lightly adapted from A Girl and Her Greens, but also on Epicurious

First, trim the artichokes:
Prepare a large bowl with cold water and lemon juice. One artichoke at a time, pull off the tough outer leaves until the outsides are mostly yellow. Using a serrated knife, cut off about the top 1/3 (pointy side). Trim the bottom of the stem, leaving some intact. Then, with a small, sharp knife, remove tough outer layer from stem. Submerge artichokes in the cold lemon water. If you are using adolescent or older artichokes, you may also need to remove the choke. (Baby artichokes don’t have them. To do so, first jimmy open the leaves to expose the choke (fuzzy thing in the middle). Then, using a small spoon, scrape choke from artichoke and discard. Place artichoke in lemon water while you trim the rest.

The rest of the vegetable prep is easy — thinly slice the garlic cloves and roughly chop the mint and parsley.

When you are ready to cook, drain the artichokes and pat dry as best you can.

Heat safflower oil in a large, sturdy pot until oil is shimmering. Place artichokes, stem side up, in pot, and reduce the heat to medium. Sprinkle garlic in between the artichokes, season with salt, and let it all fry until the garlic is golden, about 3 minutes.

Add wine and bring it to a simmer. Cover the pot and let the artichokes cook without stirring, until they are tender. you can test this by seeing if a small knife slides in and out of an artichoke easily.

Add capers and olive oil and bring to a boil. Let it cook, uncovered until the wine has evaporated. (The sound will change from bubbling to sizzling.) Add mint and parsley and fry, giving it a few stirs (it’s okay if a few artichokes tip over), reducing heat if necessary to prevent burning. When the artichokes tops are deep golden brown, it’s done — 3-5 minutes.

Serve artichokes warm, with capers and herbs scattered on top.

I served with cumin-roasted vegetables and pesto, but they’d be a great starter for many meals.