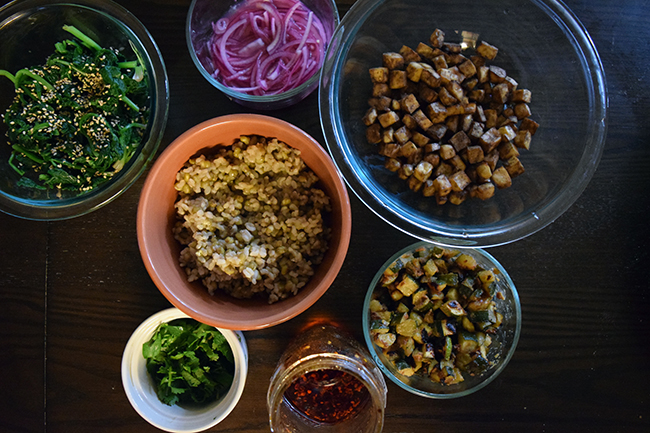 So, yes, I have another bowl for you guys, which is actually reusing / remixing a couple recipes that I’ve already posted, just, you know, arranged differently. This is real life, you guys. Getting a CSA box has certainly helped me avoid getting stuck in meal repeating ruts, but I still definitely recycle cooking methods. I’m calling this one a remix, since I took components from some previously posted recipes (and added some new stuff) to make this sort of pan-Asian-inspired bowl.

I love thickened, sweet, soy sauce as much as the next person, but I think we can dig a little deeper for flavor ideas in this ambiguously Asian bowl, right? We’ll keep those savory and sweet elements, we’ve got caramelized, nutty miso, smooth sesame, and bright lemon, too. And chili oil to the bowl eater’s taste (lots, please!).

So, all together, here’s what we’ve got, from the top, going clockwise:

Also, side note on the odd post title: if I needed one (and today I do), my DJ name would be DJade. Just imagine myself shouting that while the intro music plays to this remixed post. I don’t know, you guys. This is what the inside of my head is like.

This is more of a general technique for greens than a recipe. Sorry again about the vague amounts — very much to taste and preference!

Bring a large pot of water to boil. Prepare a large bowl with cold or iced water.

When spinach is cool enough to handle, drain and lightly squeeze to release liquid. Top with soy sauce, sesame oil, and sesame seeds.