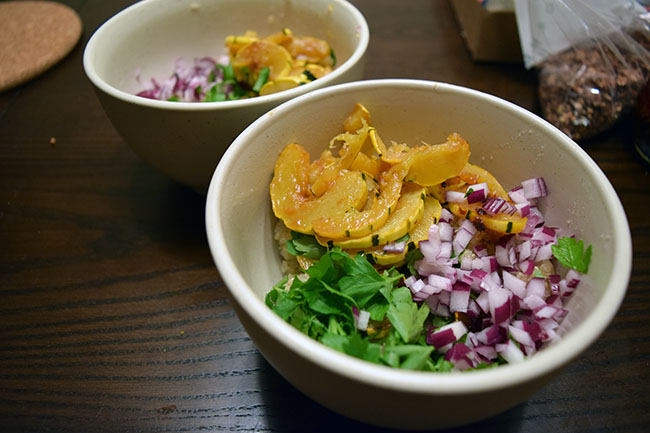 Okay, well, I think after porky stuffing with two kinds of bread and risotto (even if it has vegetables in it), we could use a real weekday food sort of post, right? I know that the ____ bowl is sort of the most basic “whole food” blog meal, but, for good reason. Grains topped with vegetables, maybe a sauce if you want to go all out? I mean, if you gave me that template to eat for the rest of my life, I’d really miss cookies, but I’d probably be fine.

There’s nothing particularly interesting about the majority of the prep for this bowl. The quinoa, I cooked normally. There’s parsley and red onions, minced, mostly because they were available in the refrigerator.

We’ve been getting a lot of delicata squash in our CSA box. One of the CSA newsletters described it as one of the more convenient winter squashes to prepare because of its thin skin and “sensible size,” which has clearly really stuck with me. Sometimes, when cutting into one, I like to yell, “What a sensibly sized squash!” for nobody’s real benefit. I’ve been roasting them with miso, which I like because it helps them caramelize (if you are not in a hurry like I was), and I think that miso’s savory nuttiness is a great pairing for slightly-sweet winter squash.

Slice the delicata squash in half lengthwise. Use a spoon to remove the seeds. (You can roast the seeds if you want. They are similar to pumpkin seeds.) Then, slice the squash into thin (1/4 to 1/2 inch) half-moons.

In a large bowl, combine olive oil, miso paste, and mirin, if using. Whisk together with a fork until more or less combined. Sorry about the imprecise measurements, but you basically want each piece to be lightly coated in the liquid. If you are unsure, I’d start with a smaller amount of oil and miso, and if needed, add more later.

Add the squash to the bowl and toss gently to coat.

Place squash in one layer on a pan covered with parchment or silicon. (The sugar in the miso and mirin will make it a little annoying to clean off an unlined pan.) Season lightly with salt and pepper, but remember that miso paste is quite salty already. Place in preheated oven until squash is soft, and if desired, slightly caramelized, about 30 minutes.