You guys. I don’t know what’s happening, either. Nobody is more surprised than me, but last month, I ran a little race that happens in my hometown, purely voluntarily. If you had told teenaged me that I would specifically wake up early and run around some suburban streets for a few miles with other crazies doing the exact same thing, and pay for the privilege, I would have laughed in your face. I mean, I actually wouldn’t have, because I was even more terrified of confrontation as a teenager, but I would have been laughing on the inside while looking shell-shocked on the outside.

Anyways, I digress. I ran a 5k, and it took me a pretty long time, but I wasn’t expecting to be among the fastest or anything. The entire experience was fairly surreal, in part because it just seemed so wildly out of character for me, but there are a few salient memories I have.

First, I’m sorry, but I just need to discuss how preoccupied I was about going to the bathroom during this entire thing. Of course I was going to take all of my generalized anxiety about the entire situation and fixate on one small thing, and of course I chose, you know, poop. I learned while “training” for this race that, well, running around seems to make you want to poop. It’s weird and inconvenient, as you might imagine. Apparently this is sort of A Thing in the running community (is that a community in which I am member now? what is this life?), which I didn’t know previously. Anyways, I realize that every other post on this thing is about food, so I won’t fixate on the details, but, I was seriously concerned that I’d need to make a pit stop mid-race and just mess up my whole flow. My strange anxiety got to the point where I actually asked a runner friend of mine, cringing the whole time, and she (kindly) laughed and told me it was a common concern among runners and gave me some tips. I’m not going to lie, I was still weirdly anxious about it, and suffice to say, when I successfully timed my BMs so as to not disrupt the 30 minutes I’d need to be running, my relief was astounding. I don’t know. The entire thing turned me into a crazy person.

The other crazy person thing that I did was a surprise for me, unlike developing consuming anxiety about one specific thing, which I feel like I probably could have predicted. That is, I actually got a huge adrenaline rush from the entire thing and ran significantly harder and faster than my usual runs of about the same distance. I think I went a little crazy while waiting for the race to begin, boxed in on this block of houses with lots of people for an unbearably long time before we could move. I was sort of milling around by the back, since it was less crowded, and I didn’t expect to care about going fast. Once we started, though, to my surprise, I suddenly felt the need to just run, which was made significantly difficult because I was standing in the back with the people with strollers and walkers. So I sort of bobbed and weaved and leapt and generally scared people (so sorry) to get myself out of there. It was weird. I suspect that is a small taste of how racehorses feel all cooped up in those pens before they can start racing. I’m ambitious but not terribly competitive, so it was new territory for me. In addition to, you know, the entire concept of running in a race also being totally new territory.

The last detail is super embarrassingly corny, so, I apologize, and we’ll be back to our regularly-scheduled programming of moderately elaborate recipes shortly. I guess the whole reason that I specifically chose this exact 5k to run was that I did realize that it’s a big paradigm shift for me, and I wanted to acknowledge that for myself. In my adolescence, the annual race had been this event that happened in my periphery and made it vaguely more difficult to drive that weekend. I never considered doing it myself, as someone who loathed running and was generally not terribly athletic. My friend and I had a joke about how in Spanish class she accidentally said, “Jade le gusta correr,” once. I mean, just uttering it was sort of hilarious. It was definitely surreal to be a participant rather than a bystander, or, someone who slept through the entire thing. I mean, I’m not saying that necessarily, you konw, Jade le gusta correr, or anything. Every time I go, it’s totally awful for the first half and sometimes also the second half, but I’m starting to think that that’s how everyone feels about running. I could write an entire separate post on trying to figure out my identity with regards to being fit or not fit, so suffice to say, I’m not totally convinced that I’m a fit person, either. But I did this one thing, at the very least — I know that. 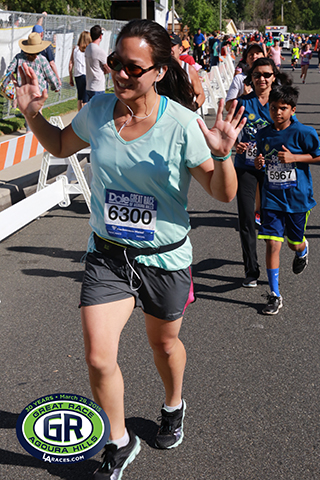 My sweet sister and mother came out to cheer me on by a street corner (my father was out of town, or he’d have come, too). Hilariously, they did not recognize me due to… my wearing sunglasses? So the one photo that my sister took is on the left, which is totally perfect, featuring my mom’s head and my enormous calf muscle. The professional photos came in later (right), and no, I don’t know why I decided to do that with my hands/arms. I’m a dork.