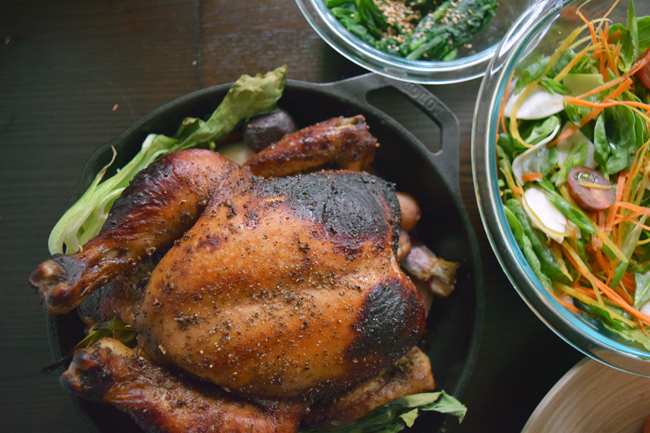 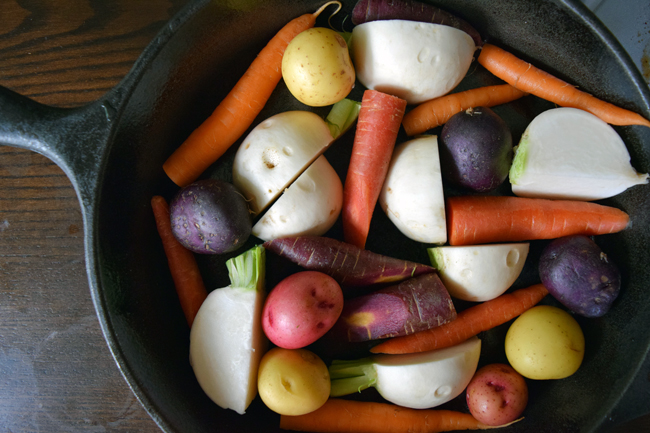 If your family’s like mine (that is, 4 people who do enjoy a meal but aren’t, you know, actually bears), then, maybe a whole turkey is just too much bird, even on Thanksgiving. As much as I strangely enjoyed spatchcocking a turkey that one year — cracking the breastbone reminded me strongly of CPR training, and you’re now relieved I’ve never performed CPR — it’s just too much food. And I never say that. I selfishly still want the ta-da moment of pulling the dinner centerpiece out of the oven, though, so just doing part of a turkey wasn’t going to happen. I don’t know if it’s sacrilege to eat another type of poultry during Thanksgiving for other families, but for one who regularly eats sushi for T-gives, a chicken’s pretty darn traditional.

That said, this one’s really not bad. I am a little paranoid about it all and use a thermometer, but tons of people manage to roast chickens without fancy equipment and haven’t perished from salmonella or whatever, so, don’t feel like you need to. I also splurged for one of Mary’s chickens since I eat meat quite rarely, but there’s no need if you don’t feel like dropping serious dollas for a raw chicken. I admit, it’s pretty tough to do so when I know I can get an already cooked one at Costco for $5.

Chinese-ish Roast Chicken
Adapted from Rasa Malaysia, Not Quite Nigella, and my mom!

Quickly rinse the chicken and remove any giblets inside. Pat dry and let air dry while you mix the soy sauce, honey, peppercorns, and sesame oil.

Rub the chicken down with the sauce, taking care to cover it completely. Let the chicken air dry for as long as you have, at least 30 minutes.

Roughly chop any large roasting vegetables and arrange them in a roasting pan or cast iron pan.

When you’re ready to roast the chicken, preheat the oven to 400˚F. Rub the chicken down with the remaining Tablespoon of oil and truss the chicken by tying its legs together at the bony point (away from the thigh) and tucking the tips of the wings behind the back.

Tuck your aromatics — scallions and garlic — inside the cavity and set the chicken on your roasting vegetables.

Roast for about an hour. The chicken is done when the thickest part of the thigh reads just barely 165˚F, or, when the juices are clear when you separate the leg and thigh. Let the chicken sit for 10 minutes or so before serving. We never bother carving it — just dig in!