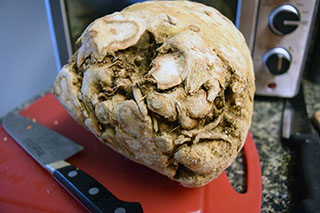 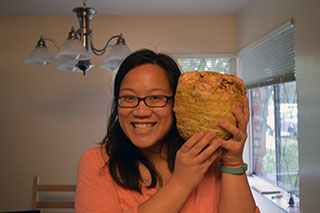 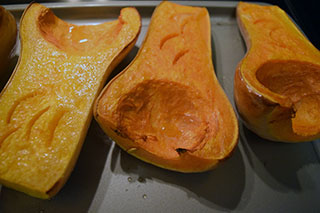 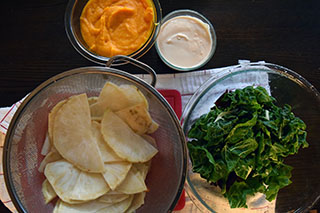 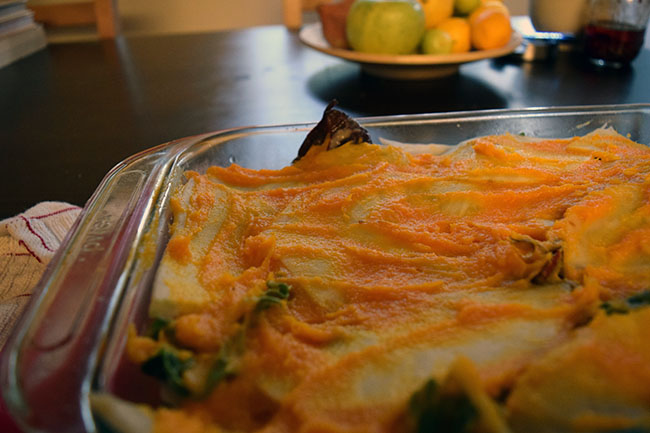 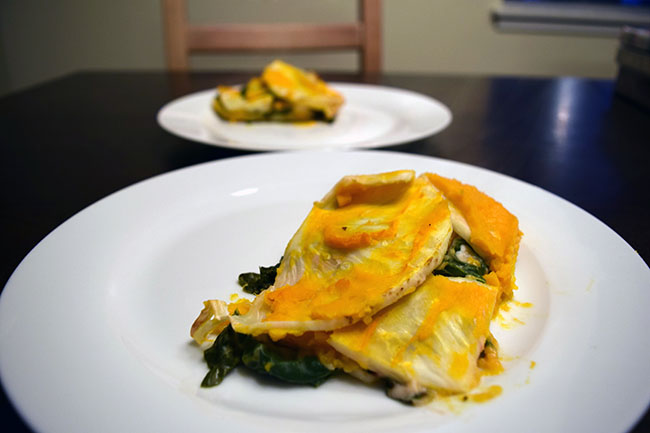 Also known as, the meal for six that only used part of a celery root literally the size of my head.

Celeriac, you guys. It definitely challenges me. I’m never sure how to prepare it in a moderately healthy way (<3 u cream and butter, but a little too much) that is also, you know, tasty. And I can’t figure out if it’s actually substantially better for me than potatoes. I would guess yes? But it’s definitely more ambiguous and complicated than a pile of leaves.

So, let’s get this out of the way, first. I named this dish faithfully as our source did, but I wouldn’t necessarily name it lasagna, myself. I think that’s a little bit of a loaded title that promises pasta and cheese, which, notably, are both absent. That’s not to say it’s not tasty, I just think of it more as a gratin, generously, or a vegetable casserole. And it is a nice, gratin that uses a lot of a root vegetable that’s never excited me. It’s hearty and satisfying without being too rich. I will say that it’s pretty labor-intensive. It took me a few hours of leisurely bopping around in the kitchen to pull the whole dish together.

You could prep the sauce, “béchamel,” and leafy layer completely ahead of time. You could also slice the celeriac noodles ahead of time, but I would keep them stored suspended in water to avoid browning. It’s all cooked before assembly, so the final bake is mainly to warm it through, making the final step is relatively fast.

Cut squash in half lengthwise and scoop out seeds. (It may be helpful to remove the base and stem before you do this.) Rub with a little oil and salt, then roast in oven until soft, about 40 minutes to an hour. Remove from oven and let cool.

Scoop out flesh from the butternut squash and blend in a food processor or high power blender with the remaining ingredients. Season to taste.

Scrub the celeriac as best you can. Remove the bottom, gnarled portion of the celeriac. Peel generously (take off quite a bit) using a knife — a peeler might not stand up to the assertive root.

Bring the vegetable broth to a boil in a large pot.

Cut into thin sheets carefully. (You can cut the root in half before doing so to make a flat surface.)

Boil the celeriac sheets in the broth until “al dente,” edible but not mushy. This will take 3-5 minutes, depending on thickness of sheets.

Drain and rinse the beans.  Blend all of the ingredients in a food processor or high-power blender until smooth, seasoning to taste.

You could use dried beans, of course (you want about 2 cups total, cooked), though that definitely bumps this dish into the multi-day prep category.

Wash and destem the chard. Slice into medium (palm-sized) pieces.

Place in the oven until hot, timing will depend on if you prepared the ingredients beforehand or not. From room temperature, this took around 20 minutes for me.