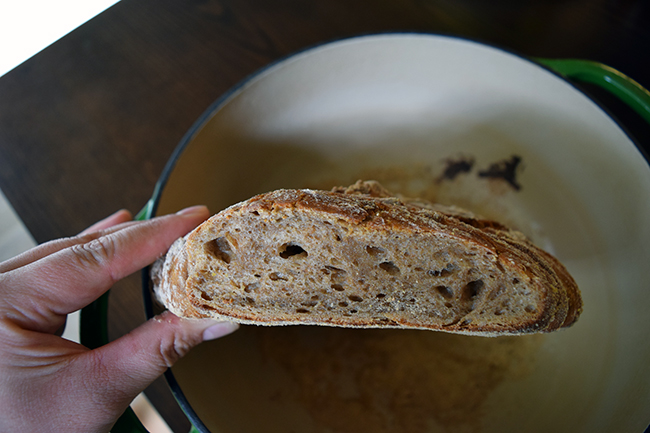 But for serious, being behind on our current book aside, I’m embracing the book-club-attending, food-blogger-aspiring sort of life I’m living these days. There’s nothing quite so satisfying as politely declining a raucous hangout because you are behind on your book club book. Lean into it. Become one of us. Turn pages, not heads. (But also turn heads, because people who like books are also astonishingly good-looking, I’m pretty sure that’s science.)

That sourdough, you guys… It’s been a bit of a saga for me, from figuring out how to make sourdough actually rise, to making it taste actually sour, to now trying to avoid white bread. I’m pretty satisfied with this incarnation, though, full disclosure, the second time I made it, I didn’t sufficiently flour the Dutch oven, and it went badly. I had to excavate the bread out like the paleontologist I aspired to be as a child.

The thing about this bread is that, while it’s pretty hands-off and easy, it takes some significant time and planning. It’s part of the whole persona of staying in so you can tend to your growing loaf that you are making for a literary event several days from now. It’s fine; people will understand. Or, at least, I would.

And, you’ll need a 6-8 quart oven-safe vessel that you can also cover. I use a Dutch oven.

*Don’t have a sourdough starter, you say? I used the exact instructions from The Cheese Board: Collective Works to harvest mine from the air. It is a great book with detailed but still achievable instructions. I won’t reprint the entire excerpt here, but the general gist of it is that I started with 3/4 organic rye flour and 1/2 cup of water, letting it sit out loosely covered for a couple days. Then, I added 2/3 cup of bread flour, and let it sit out for another day. After that, for a week or two, every 24 hours, I lovingly “cycled” the starter by discarding all but 1/4 cup, and adding 1/2 cup of water and 2/3 cup of bread flour. I mixed it up, sometimes, adding wheat flour, which I read has more nutrients for the yeast. Some authors (cough–Peter Reinhart–cough) have more complex instructions for creating a sourdough starter involving pineapple juice, and some authors just suggest leaving out some flour and water for a while. You can also buy dried starter online, or ask a local bakery (or a friend who bakes!) for some.

At least 12 hours before baking: combine your invigorated sourdough starter, whole wheat flour, bread flour, salt, and water in a large bowl, preferably with a lid. Mix until a loose, very wet dough is formed, and let it sit in a cool place (out on the counter next to a window, not in the refrigerator) overnight.

At least 2 hours before baking: Very generously flour a large cutting board. Turn the dough out from the bowl onto your floured surface. It will be very wet and sticky, and it won’t hold its shape. I usually turn the bowl upside down over the dough to keep it contained at this point. Let it sit 2 or 3 hours.

45 minutes before baking: Place your oven-safe pot and lid into the oven and heat oven to 450˚F. When the dough is ready, very carefully remove the pot from the oven, removing the lid. Very generously coat the bottom of the vessel with flour or cornmeal. Seriously, don’t skimp. Scrape, scoop, wrestle the wet and sticky dough into the heated pot. It’ll look like a hot mess, and that’s okay (rustic!). Cover the pot with the lid (be careful), and bake for 30 minutes. After that, remove the lid and bake for another 15 to 30 minutes, until the loaf is browned and sounds hollow when you knock on it.

If you want the loaf to maintain structural integrity, it’s better to wait as long as you can bear before cutting into it… but I wouldn’t judge you if you sliced into it right away.